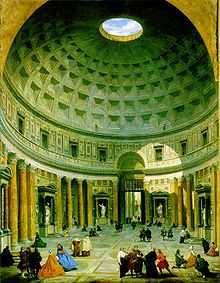 The interior of the Pantheon in the 18th century, painted by Giovanni Paolo Panini. Courtesy of Wikipedia.

We’re deep into the history of Rome here in our homeschool, currently studying the ceasars before Nero, during the spread of the gospel and the lives of the apostles. It’s really fascinating stuff! 🙂 We recently studied about some of the temples constructed for their gods. In addition, I’ve been reading Henry Morris’ book, The Long War Against God (an excellent book).

One of the famous Roman temples is the Pantheon. One website says,

Pantheon means “all of the gods” and the building’s roof represented the dome of the sky, where Romans believed the gods resided. At equinox, the sun is on the celestial equator – where Earth’s equator would lie if projected into space – which was seen as the most stable part of the sky, a perfect eternal home for the gods. [Researcher Robert] Hannah thinks that by marking the equinoxes, the Pantheon was intended to elevate emperors who worshiped there into the realm of the gods. James Evans, a historian of astronomy at the University of Puget Sound in Washington state, is intrigued: “The architect of the Pantheon would certainly have been aware of the symbolic connections between the cosmos and the empire, and between the sun and the emperor.”

As I’ve been pondering more this week about some questionable homeschooling goals, I’ve been thinking a lot about that Pantheon. You see, pantheism is the belief that god is in all things, that all things are god, and that god is even in me. It comes from the roots pan plus theism, meaning “all” and “gods.” It’s a very nice thought, that a god-like force pervades the universe, the trees, the stars, the ancient gods of every culture — and even me. It’s the thought behind sayings like, “Say a prayer to the universe for me,” or “Wish upon a star,” or “Send good thoughts out there for me, okay?” The idea is that god is in all things, that we can pray to this god, and that this god will move throughout all the universe to work things out for my good.

The dangerous thing is that this idea has certainly crept into the homeschooling world. Some people believe we can worship God and idols, adding the Bible to a pantheon of idols in our lives.

Last week I wrote about some obviously secular authors, and of course I found fault with them. Today I must be crazy, because I’m going to find fault with some sweet Christian authors. I’m not doing this to cause trouble! Believe me, you could certainly put MY life under a microscope and find fault with me, too. Neither am I finding fault with all their methods. Believe me, I use many of their ideas in my own homeschooling. (I have to be honest, though; I’m rethinking everything right now. This might change.)

I’m simply finding fault with the possibility of including all gods in a pantheon of homeschooling philosophies. I’m finding fault with adding Jesus to my worldly “god shelf,” with having my worldly cake and eating it, too. It’s a sneaky thing that can happen without our even realizing it, so that’s why I’m bringing it up today.

I’ve been a happy Charlotte Mason fan since I first heard about her in the late 1990s. I’ve happily read all her books and all the books about her. She has certainly been a huge influence on my life, and if you peruse my website, you’ll easily see her influence in my writing and in my homeschooling downloads.

Don’t you hate when you absolutely love and feel comfortable with something… and then you can feel God gently trying to remove it from your life?

Maybe I won’t throw out all the Charlotte Mason with the bathwater, but her methods and philosophy are certainly getting a closer examination in my own mind. I’m trying to be honest and fair with you here. I don’t have it all figured out yet!

But here are some of my concerns:

Ambleside Online has nicely summarized 20 of her major principles here, and I honestly agree with many of them. Short lessons, narration, dictation, good habits, copying to learn to write, and living books rather than “twaddle” — I’ve heard these concepts at every homeschooling conference, in every reputable homeschooling book, and from every homeschooling expert for almost 15 years now. They’re drummed into my head so far that I’m not sure how to separate Charlotte Mason’s ideas from my own. But if you’ll follow along with me over the next year, I’m certainly planning to examine each and every one of these ideas against Scripture alone, to see if they “make the cut.”

One Charlotte-Mason idea that I’ve struggled with for the last couple years is the idea of limiting the amount of direct teaching we give to our children, letting ideas speak to our children from the books we read and the nature we observe instead. She wrote,

“Let [children] get at the books themselves, and do not let them be flooded with [diluted talk] from the lips of their teacher. The teacher’s business is to indicate, stimulate, direct….The less the parents and teachers ‘talk-in’ and expound their rations of knowledge and thought to the children they are education, the better for the children…”

Hmmm…. Not sure if I agree with that, for two reasons. First, God’s Word says I’m to actively teach his commands to my children (but yes, in the context of everyday life). Secondly, I now have seven children, and it just doesn’t seem to work. Maybe my kids are dumb, or maybe their mother is dumber, but we all seem to have brains made of rocks. We need daily pounding (a.k.a. “drill” and “memory work”) to get things to stick.

That’s one reason I’ve been drawn more and more to classical education, a form of homeschooling that no one talked about when our family started homeschooling — but it’s incredibly popular now. Popular advocates include Dorothy Sayers, Susan Wise Bauer (The Well-Trained Mind), Harvey and Laurie Bluedorn (Teaching the Trivium), and Christine Miller (All Through the Ages and the website, Classical Christian Homeschooling).

In my own words, classical education emphasizes memorization and languages (such as Hebrew, Greek and Latin) during the “grammar” stage, logic and thinking skills during the “logic” stage, and communication through writing and speaking during the “rhetoric” stage. Love it!

Except… The reason we’re told to return to a real classical education is that we should study the Great Books and have a Great Conversation with the Great Minds that lived before us. (Please note: Not all these authors are in favor of this!) Some even put Scripture to the idea, saying,

“This is what the LORD says: ‘Stand at the crossroads and look; ask for the ancient paths, ask where the good way is, and walk in it, and you will find rest for your souls'” (Jeremiah 6:16).

Classical education advocates returning to the ancient paths, asking what a good education has consisted of throughout history, analyzing why it was so effective, and deciding to throw public-school mythologies out the window in favor of this ancient education.

“Yet my people have forgotten me; they burn incense to worthless idols, which made them stumble in their ways and in the ancient paths. They made them walk in bypaths and on roads not built up” (Jeremiah 18:15).

Many times those “ancient paths” are filled with “worthless idols.” This is easily and quickly seen when you examine a list of the “Great Books” which we’re supposed to be returning to. (Some popular lists are TheGreatBooksList.com, the Well-Trained Mind, and many more, if you’ll Google it.) God says that if I turn to these “great books,” I could very well cause my own children to forget Him and to stumble in their way. I have a personal dread of causing one of these little ones to stumble in sin, and you should, too! This summer, we sat down and threw away a LOT of books from our home library. A few more books might still get thrown. In my mind this is a serious matter.

“…be careful not to be ensnared by inquiring about their gods, saying, ‘How do these nations serve their gods? We will do the same.’ You must not worship the LORD your God in their way, because in worshiping their gods, they do all kinds of detestable things the LORD hates” (Deuteronomy 12:30-31).

If I am intending to have a “great conversation” with the Greatest Book ever written (God’s Word), then I think it’s fair and good to consider some of the teaching methods proposed by classical education and indeed used to educate some of the finest and godliest believers who have ever lived. Just keep in mind that some current authors consider the Bible to just be one great book out of many. It’s very subtle, so be warned.

The Power of Words

I believe that words can have a profound affect on us. God’s Word especially holds this power, as Jesus Christ is the living logos or Word. His Word is everlasting and can cut to the deepest parts of our hearts.

But it’s a very pantheistic idea to assume that all man’s words have this god-like power. I’m an author, and I really do love books. I also realize that my words have power, and I pray that I use this power responsibly. But my power is not equal to God’s.

Other authors are aware of their power, too. If nothing else, many times our minds are taken captive by vain and worldly philosophy that has been planted in our world by the Father of Lies himself.

As my husband is fond of saying, “In our minds we agree with God, but then our hearts kick in.” In other words, it’s easy to say in theory that we are basing all our decisions on the Bible, but in reality it’s hard. It’s hard to see the errors in the first place, then it’s agony to tear them out of our hearts.

So next week I propose that we all work on this together! Let’s examine God’s Word for what and how we should be teaching, then we can dialogue about what that looks like in our world and homes. (Isn’t blogging great?)

END_OF_DOCUMENT_TOKEN_TO_BE_REPLACED 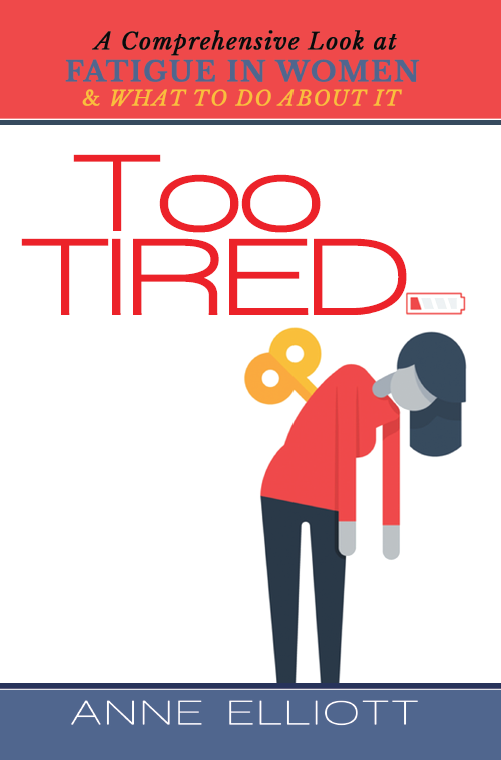